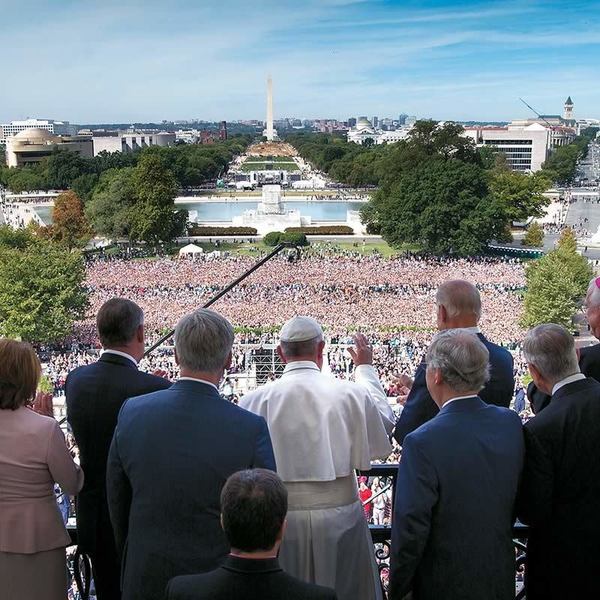 Father Jenkins spent considerable time in Washington when Pope Francis visited the United States. He concelebrated the canonization Mass of Junipero Serra, joined in a welcoming reception at the White House, and attended the joint meeting of Congress at which the pope spoke. Father Jenkins also participated in numerous print and broadcast interviews, discussing the importance of the messages the pope delivered to this nation and the world. 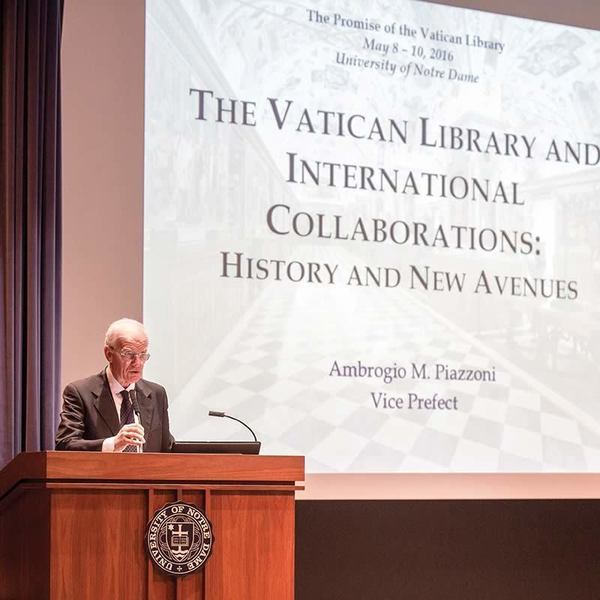 Notre Dame and the Vatican Library have formalized a unique agreement of collaboration and exchange. The only such arrangement between the library and any American academic institution, the agreement will develop visits and informal exchanges of faculty, scholars, librarians, and administrators; organize joint conferences, lecture series, art exhibitions, and musical and theatrical performances; and explore the development of joint programs of research. 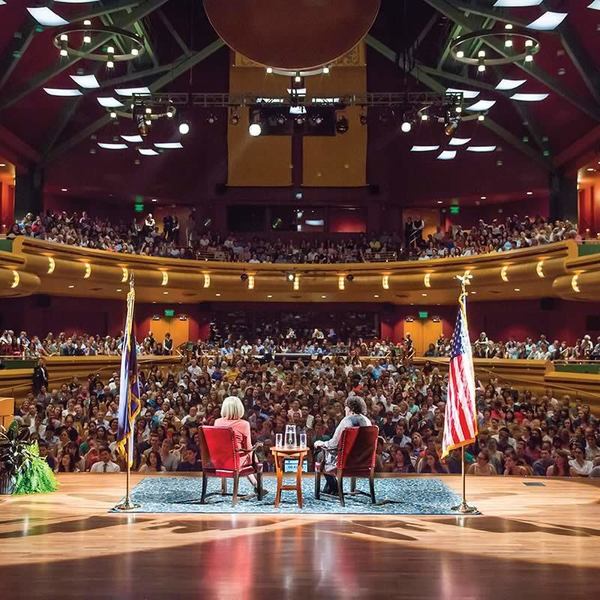 A capacity crowd of students, faculty, and staff filled the Leighton Concert Hall of the DeBartolo Performing Arts Center to hear remarks from U.S. Supreme Court Justice Sonia Sotomayor. The nation’s first Latina Supreme Court justice discussed a wide range of legal, intellectual, cultural, and even personal issues arising over the course of her life and career. 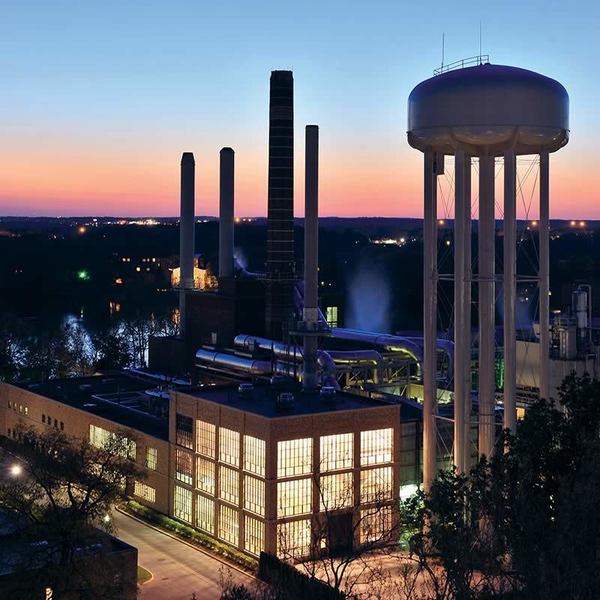 In the wake of an encyclical by Pope Francis on the environment, Notre Dame announced a plan to cease burning coal in the campus power plant within five years, and to reduce its carbon footprint by half by 2030. The University already has reversed its use of coal from 85 percent to 15 percent in recent years, with the majority of energy input to the power plant now coming from natural gas. In coming years, the University will invest $113 million in renewable energy sources and projects, including a hydroelectric project, solar power, and geothermal fields both on and off campus, which collectively will reduce CO2 emissions by 47,500 tons. 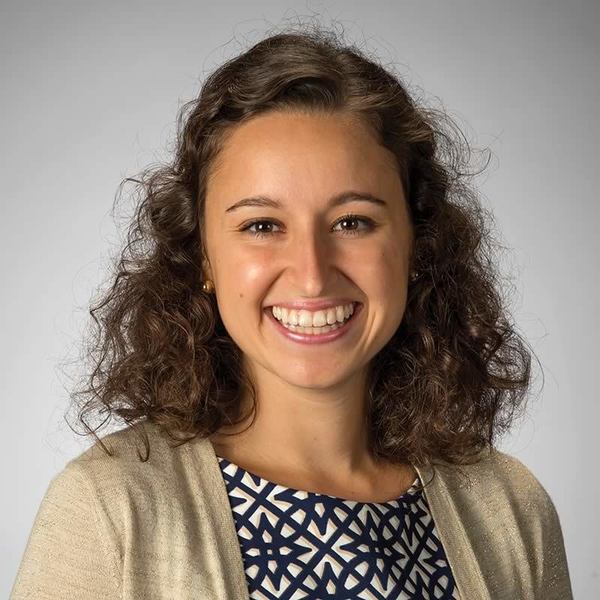 Emily Mediate earned a Rhodes Scholarship, the second Notre Dame student in as many years to receive the recognition, following Alex Coccia. Emily majored in Africana studies and pre-health studies with a minor in international development. The work of faculty and staff in the Flatley Center for Undergraduate Scholarly Engagement is playing a pivotal role in identifying potential applicants for Rhodes, Marshall, Truman, and other prestigious scholarships and assisting them through the process. 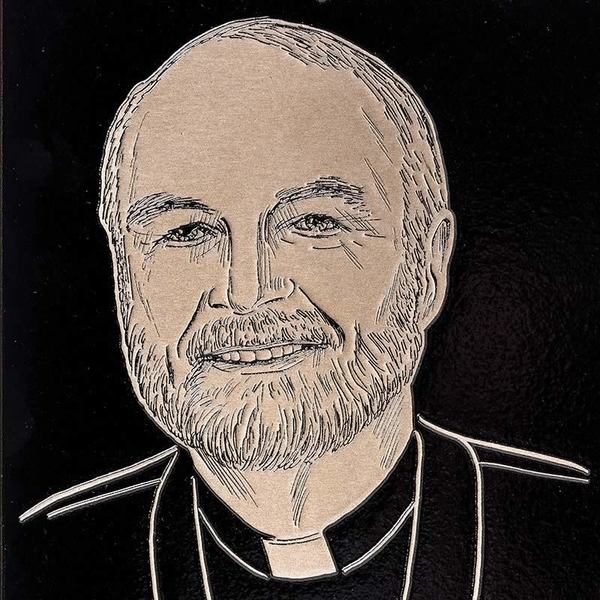 Additions to Wall of Honor

Rev. John S. Dunne, C.S.C., a longtime Notre Dame professor, and three individuals representing the first generation of African-American students at the University were added to the Wall of Honor on the first floor of the Main Building. Father Dunne was a beloved teacher and mentor for more than half a century who wrote some twenty influential works on theology and the spiritual life. 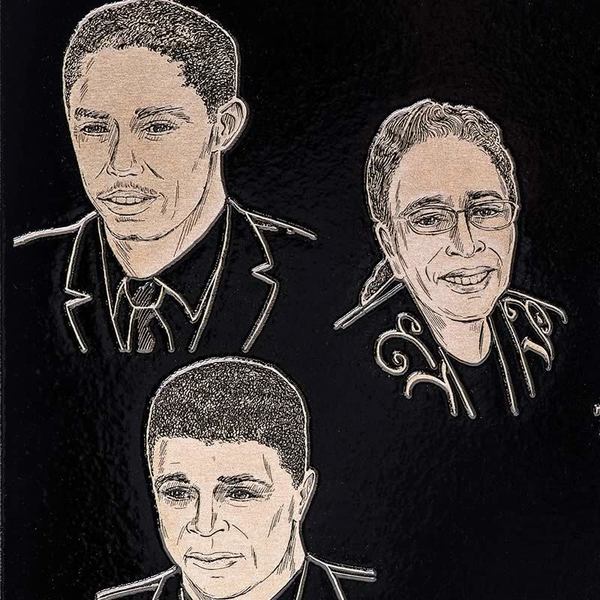 Former University President Rev. Edward “Monk” Malloy, C.S.C., established the Wall of Honor in 1999 to memorialize men and women “whose contributions to Notre Dame have been lasting, pervasive and profound.” 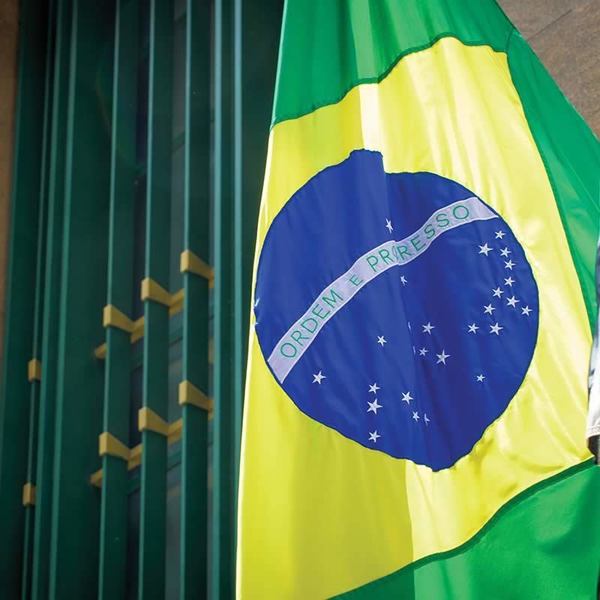 Notre Dame’s global reach took a distinct southerly turn last year. In a speech in São Paulo, Brazil, Father Jenkins said: “For too long, the United States and its best universities looked east to Europe and more recently to Asia for valued partnerships.” During the speech, Father Jenkins announced the launch of a new Global Gateway in Brazil to complement those already in Dublin, London, Rome, Jerusalem, and Beijing. Prior to visiting Brazil, Father Jenkins and other Notre Dame administrators made stops in Chile and Argentina. 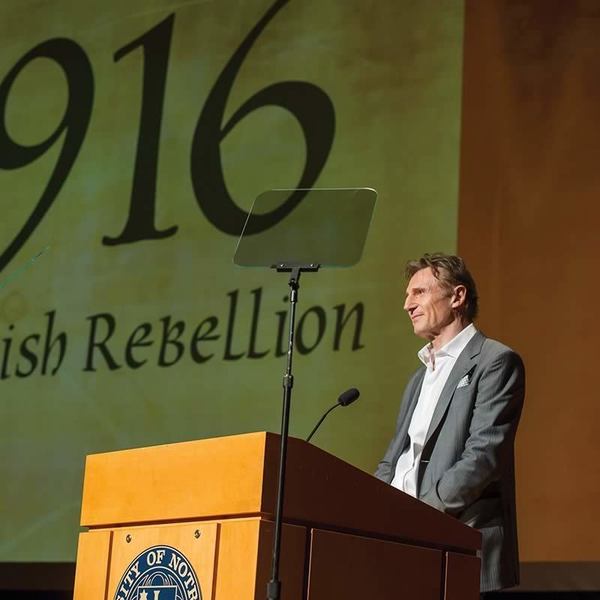 Notre Dame’s international efforts are increasingly widespread, but the close association with Ireland will always remain. During the past year, the University initiated several notable partnerships with the Emerald Isle:

On the centenary of Ireland’s Easter Rising, the Keough-Naughton Institute for Irish Studies produced a three-hour documentary titled 1916: The Irish Rebellion, memorializing the events in Dublin on Easter Week a century ago when an insurrection started a process that culminated in an independent Irish state and accelerated the disintegration of the British Empire. The production aired on scores of public television stations nationwide, as well as in Ireland and throughout the world. It was directed by award-winning Irish documentary maker Pat Collins; written by Bríona Nic Dhiarmada, the Thomas J. and Kathleen M. O’Donnell Professor of Irish Studies at Notre Dame; and narrated by Oscar-nominated actor Liam Neeson. 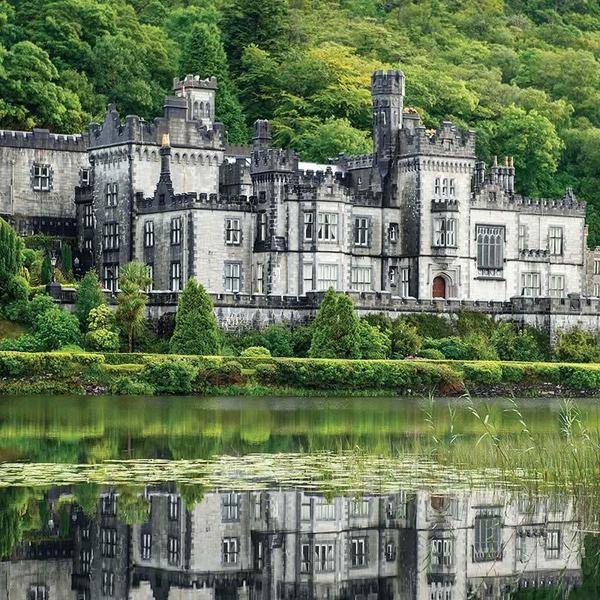 In a very different Irish collaboration, the University and the Benedictine Community at Kylemore Abbey in Connemara, County Galway, Ireland, formed a partnership to create a center to advance their shared spiritual, cultural, and educational missions. The programs offered by the center will draw upon both the rich tradition of Benedictine spirituality and the academic rigor of Notre Dame.

The University also has agreed to steward still another iconic Irish structure—Newman University Church in Dublin—and to found the Notre Dame- Newman Center for Faith and Reason. Built by the then-rector of University College Dublin, Blessed John Henry Newman, the church opened in 1856 and has since been a landmark in Dublin’s city center and a testament to the harmony of faith and reason. Newman would later be named a cardinal of the Catholic Church, and was beatified by Pope Benedict XVI in 2010. Rev. William R. Dailey, C.S.C., has been appointed director of the center, and longtime Notre Dame Folk Choir director Steve Warner will be associate director with special responsibilities for music, liturgy, and outreach. 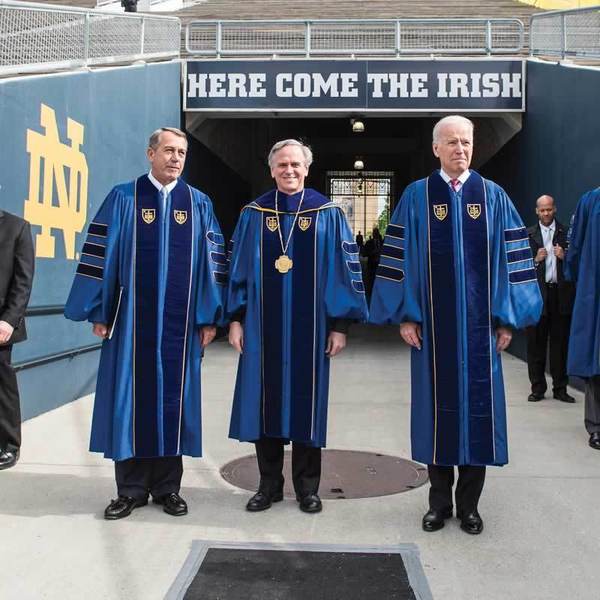 It was when Pope Francis spoke to Congress that Father Jenkins thought of awarding the 2016 Laetare Medal to Vice President Joe Biden and former Speaker of the House John Boehner, both Catholic leaders who often put aside partisan differences to find common ground on important issues. To be sure, the University does not agree with some of the positions both men have taken. But at a time when the country is sorely in need of more collaboration and less vitriol, Father Jenkins found this an opportune moment to recognize these two leaders. 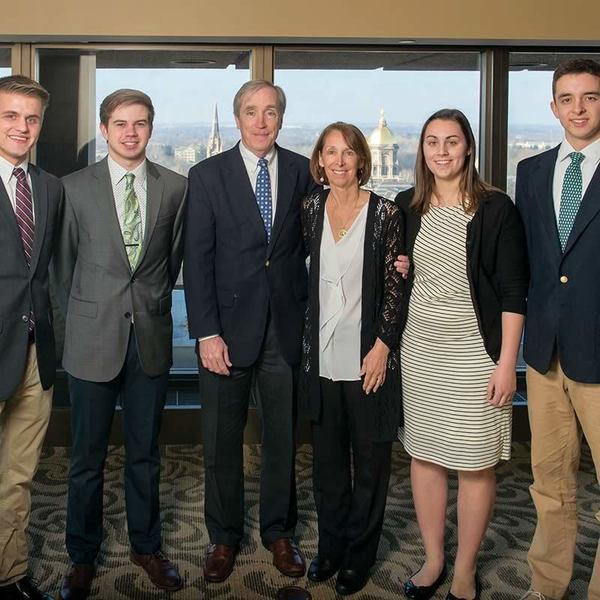 John J. Brennan elected chairman of the Board of Trustees

John J. Brennan, chairman emeritus and former chief executive officer of the Vanguard Group, was elected chair of Notre Dame’s Board of Trustees. He holds degrees from Dartmouth and Harvard and his three children are Notre Dame graduates. He succeeds Richard C. Notebaert, who led the board for the past nine years. 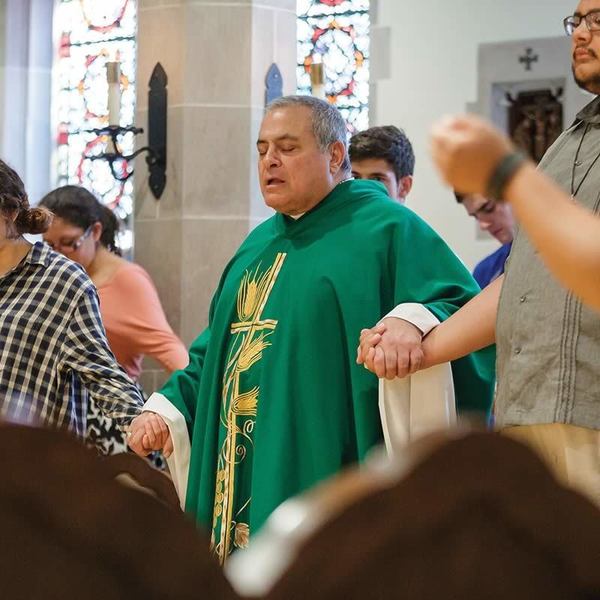 Rev. Joseph Corpora, C.S.C., director of university-school partnerships for Notre Dame’s Alliance for Catholic Education, has received a mandate from Pope Francis to be a Missionary of Mercy. The Missionaries are some 800 priests worldwide selected by the pope to be special confessors and “living signs” of God’s forgiveness during the Holy Year of Mercy officially proclaimed in his letter, Misericordiae Vultus (The Face of Mercy), last year. 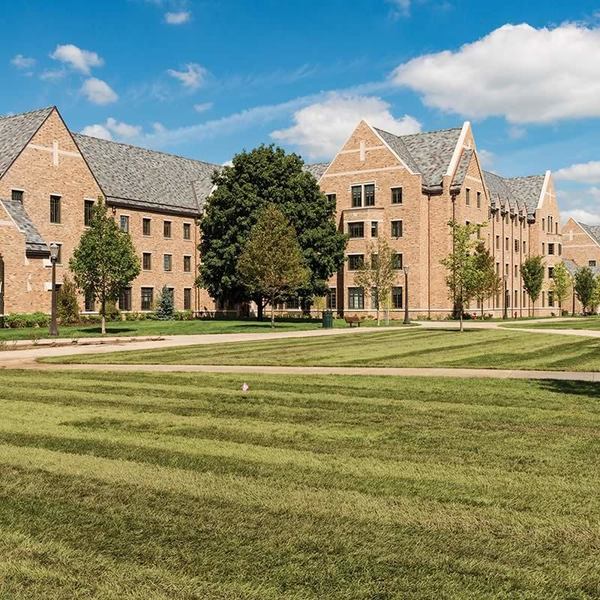 Jimmy and Susan Dunne of New York City and Jay and Mary Flaherty of Los Angeles each made $20 million gifts to Notre Dame for the construction of two new residence halls on campus. The halls were not built with the objective of increasing enrollment; rather, Dunne Hall for men and Flaherty Hall for women will relieve crowding in current residence halls. 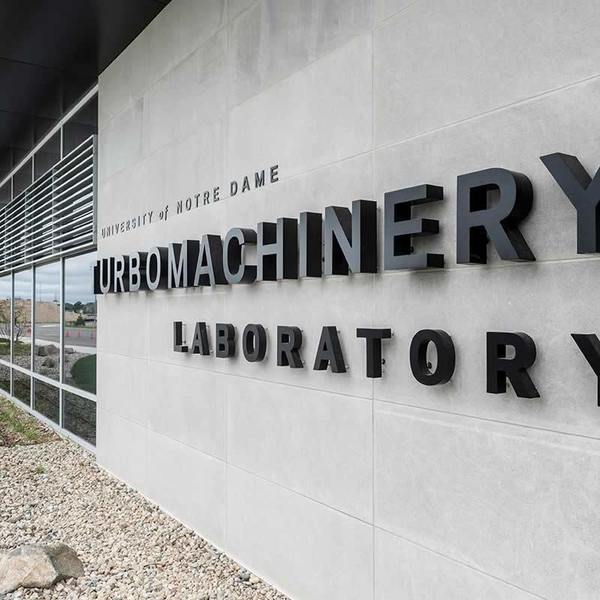 The Notre Dame Turbomachinery Laboratory opened in Ignition Park in downtown South Bend. The $36 million facility will house researchers and equipment to test, analyze, and advance the technology of gas turbine engines used for jet aircraft, power generation plants, and the oil and gas industry. General Electric Corp. and Pratt & Whitney are the first two companies that will conduct testing in the laboratory. 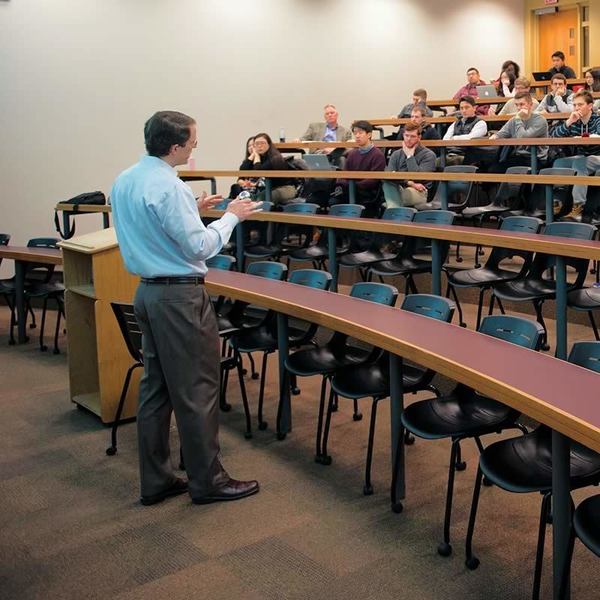 James Parsons and Dr. Carrie Quinn made a $20 million gift to the University to endow a new Institute for Global Investing in their alma mater’s Mendoza College of Business. The institute will leverage three key strengths of Notre Dame— top-rated finance faculty, an innovative finance curriculum and extensive strategic partnerships—to form a platform for both learning and influencing the way investment managers the world over think about global finance. The institute’s goals include expanding internship and career placement opportunities; leveraging key partnerships among the college, the Notre Dame Investment Office and the University’s extensive alumni network; furthering faculty research and thought leadership; attracting prospective finance faculty; and adding depth and breadth to Mendoza’s already strong finance curriculum. 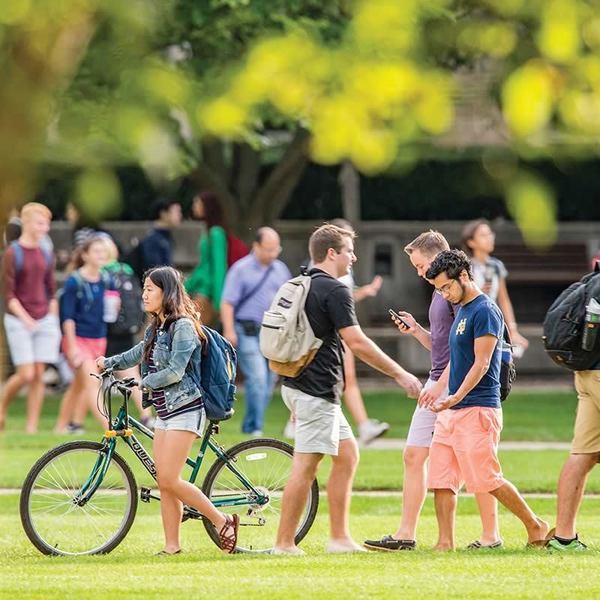 Many of the top U.S. universities, including Notre Dame, have made the dream of attending them a reality through generous financial aid packages to qualified students in need. However, once on campus with fellow students who come from more economically affluent backgrounds, many of these same students have found it difficult to fit in. To address that concern, alumnus Sean Cullinan and his wife, Sue, made a $20 million gift to his alma mater to create the Fighting Irish Initiative, which will fully fund the cost for low-income students to attend Notre Dame—including tuition and fees, room and board, books, transportation, and personal expenses. At the same time, the initiative will create a comprehensive enrichment program that will help these students get the most from their Notre Dame experience.